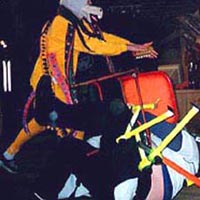 After briefly toying with a trio line-up including Robin Edgerton, Hammeroids and Hagstrom abruptly decided to change both name and stylistic direction by joining the noise sub-genre one critic dubbed "junk-noise." The premise of junk-noise rests on the fact that the noise music genre itself had run its course. Built as a free-form sonic amalgam of the most shocking and chaotic of 20th Century avant-garde art movements - futurism, dada and abstractism to name a few, noise music soon reached such an extreme level that it became hard to imagine any further exploration in this direction. The solution for forward-thinking noise artists was to break new ground in presentation rather than sound. Acts such as The Hanatarash, Violent Onsen Geisha, The Gerogerigegege, Smell & Quim, Emil Beaulieau and Evil Moisture abandoned the typical cover art, themes and performance styles of noise - a rather dry mixture of industrial and new music themes - in favor of approaches using varying degrees of humor and absurdity. Cock E.S.P., the title of a Hanatrash song, was chosen as the new band name as the duo explored comic noise and challenged the prevailing attitudes of more serious and traditional noise acts. A prime example of the noise produced during these years is the CD "Greatest Dicks," released by RRRecords under their Pure imprint.

Releases by Cock E.S.P. on Negatron 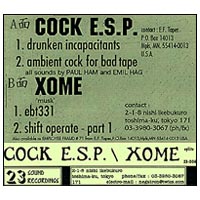 This collaboration of sorts includes one fresh and fuzzy side by the fabled COCK E.S.P. from Minnesota, USA and one additional side by XOME, the up and coming, mostly coming, electronic noise outfit from Tokyo, Japan. The COCK E.S.P. side includes a mysterious adventure into pseudo-reality and broken equipment. Flip the tape over to find a couple of squeaks and churns amplipied to unheard of levels and drawn out over and over until your kidney bursts. Highly recommended high low fidelity stereo experiments in sound. Also available as another tape on E.F. Tapes in the USA. It is EF#71. more info